From the golden beaches and relaxed backwater tropics along the Malabar Coast to the cool, verdant hill stations and the dramatic mountain vistas of the Western Ghats, our bicycle tour of Kerala is a trip of a lifetime. You’ll learn about the region’s long history of tea cultivation. You’ll stroll beaches along the Arabian Sea, learn why Kerala means “land of coconuts”, and explore the lush hillsides where black pepper, cinnamon, nutmeg and cardamom – essentials in Keralan cooking – grow abundantly. You’ll relax on a river houseboat and have the opportunity to be rejuvenated by hands fluent in Ayurvedic wellness and massage. Sounds heavenly, right? No wonder Kerala is known as “God’s Own Country.” 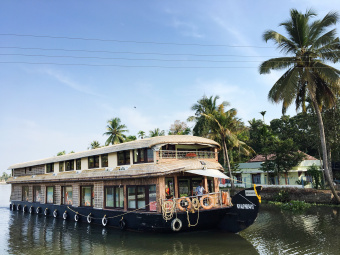 DAY 1:  We will meet you upon your arrival at the airport and take you to our starting hotel in the port city of Fort Kochi. We’ll stay in the historic area of town that still displays the architectural, religious and cultural impressions left over the centuries by the Portuguese, Dutch and British. We’ll take it easy today to get over our jet lag with an orientation and dinner together. 0 miles.

DAY 2:  If you want a snapshot of what India’s colonial past was like, there is no better place to take it than Fort Kochi. Exotic spices brought foreigners to Kerala as early as 3000 B.C., but it wasn’t until a 14th century flood created Kochi's natural harbor that it became the epicenter of India's spice trade.

Explorer Vasco de Gama arrived in 1497, thus starting the reign of Portugese control. The Dutch usurped Kochi in the 17th century, but turned it over to the British about 100 years later. St. Francis Church, the Dutch Cemetery, Santa Cruz Basilicata, and other Fort Kochi landmarks all lay testimony to Europe's influence.

Asia had its way with Fort Kochi too, with the Chinese introducing large fishing nets that are lowered into the water to harvest fish. We will spend the entire day visiting some of Fort Kochi’s beloved landmarks by bike. 13 miles.

DAY 3:  Sky above, sand below, peace within. This could be the day’s mantra as we cycle toward Cherai Beach. With gentle waves, warm waters and soft sand cradling colorful seashells, it’s particularly friendly to swimmers and beach combers alike. Coconut groves and those famous Chinese fishing nets frame the landscape. 19 miles/4 hours cycling.

DAY 4:  Today, it’s all about the birds. We take flight by bike and car heading east toward an evergreen forest on the banks of the Periyar River. The bird sanctuary here was revered for its rich bird habitat by the world renowned Indian ornithologist, Dr. Salim Ali. We’ll overnight nearby, so plan to rise early tomorrow morning to look for the endemic Malabar grey hornbill or the rainbow-colored Indian pitta. 25 – 43 miles/4-6 hours cycling.

DAY 5:  Today is our hilliest day, but we’ll start flat along the Periyar River. We'll drive over the most challenging and busier sections to Munnar, one of the most scenic hill stations in India. Hill stations are towns at higher elevations where European colonial settlers would escape the summer heat. Situated at 5,200’ in the Western Ghats, Munnar is definitely cooler, and the town’s surrounding hills are lush with tea plantations, spice gardens, rubber tree forests and rare wildlife, such as the Nilgiri tahr, an endangered mountain goat. 20 miles/4 hours cycling.

DAY 6:  Three rivers come together in Munnar – Mudirapuzha, Nallathani and Kundaly – and thanks to the area’s dams, the region produces large amounts of hydroelectric power and water to irrigate the fertile land.

We'll explore the surrounding tea plantations on our bikes and learn how the evergreen trees are trimmed by hand to stay waist high as verdant hedges along the hillsides. The harvested leaves are sorted, dried and processed at the nearby factories throughout the year, as India is the second largest tea producer in the world. We'll visit a tea factory and museum, and yes, we'll take time to taste the tea as well. 13 miles/3 hours cycling.

The rocky summit of Thangalpara pays homage to a Sufi mystic who lived and died there 800 years ago, while Murugan Mala boasts a small rock-cut temple dedicated to the Lord Murugan, the Hindu god of war. The Kurisumala Ashram was founded more recently as a Christian monastery. Vagamon has attracted the devout for centuries. Our journey to this serene village will include pedaling some hills, but they're mostly downhill and the cool air will keep you refreshed. 21 miles/4 hours cycling.

DAY 8:  Back down to the coast! Or more specifically to the canals, lakes, rivers and lagoons that make up the  “backwaters” that parallel the southern coast of Kerala. Allepey, more recently named Alappuzha, is a village of the brackish backwaters where colorful snake boat races have drawn thousands of spectators from all over the world every summer. 35 miles/5 hours cycling.

DAY 9: Today is all about traveling at a slower pace. We’ll take an easy bike ride around Alappuzha, where you’ll get a sense of how the people live and work.

Then we’ll take an even slower cruise onboard one of the handsome houseboats that float through the backwaters. They were traditionally used to transport rice and spices from field to market. The romantic wooden vessels with thatched roofs are marvelously held together by coir fiber derived from coconuts -- an important industry here. You’ll quickly understand how residents rely on these backwaters for transportation, recreation, work and sustenance. 7 miles/2 hours cycling.

DAY 10:  We will spend our final biking day pedaling to Mararikulam, and more specifically, Marari Beach. The fishing villagers start their day before the sun rises as the men go out on the water. If we’re lucky, we can watch them working together to pull in their huge nets full of the day’s catch. They’ll sell their catch by auction right on the beach to the local women who in turn will bring the fish to market. It is very likely that our evening meal will offer some very fresh fish!

Mararikulam also has an old temple in honor of Shiva, who is one of the three main Hindu gods. By evening, we will turn in our bicycles and stroll the beach to enjoy the sunset. 9 miles/2 hours cycling.

DAY 11: Our final full day in Kerala is spent at Marari Beach, enjoying the simple pleasures of an Ayurvedic massage or treatment. There is also the possibility of practicing yoga or meditation with an experienced teacher. Then spend the last part of the day chilling out in one of the shaded garden hammocks beneath a coconut tree. 0 miles.

DAY 12: After breakfast, we’ll say good-bye and shuttle you to the Kochi airport. Contact us about adding on a visit to the Taj Mahal. Vita Kerala!